We Will Never Forget! 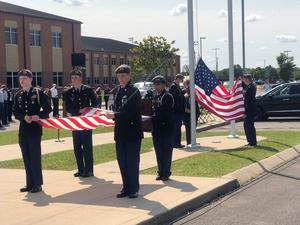 Cadets of the Red Hawk JROTC Battalion participated in a 911 Remembrance Ceremony on 10 SEP 2021. Cadet Lieutenant Colonel Anthony Lamantia reads out loud, “Tomorrow is the 20th Anniversary of what we now know as 9-11, and designated Patriot Day on the calendar. September 11, 2001 still has an impact on our lives as young citizens. Although we were not born when this tragic and horrible attack on our nation took place, we have parents, aunts, uncles, and perhaps siblings that have served in the war on terror as first responders or in the military over the last 20 years. Therefore, to honor the loss of life and sacrifice of our first responders and military, we will conduct a Flag Retirement Ceremony by properly and respectfully retiring the flag that has flown over our school for the last year. We hope that today’s ceremony will stand as a reminder to my generation of the continual sacrifice of our nation’s first responders and military. It is also our hope that this 20th anniversary of the vicious attack on America will remind my generation that we can never forget and must remain vigilant.”

The SCHS theater department performed an excerpt from the play called, “Out of the Clear Blue Sky-voices of 9/11.” In this play are personal stories from some of the people directly involved in what we now know as 9/11.

We concluded the ceremony by taking down the old flag to be prepared to be retired to the song “Retreat”.

Special guests who attended were: