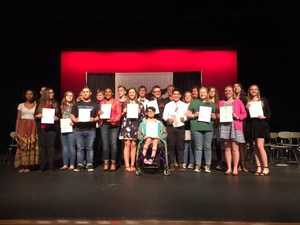 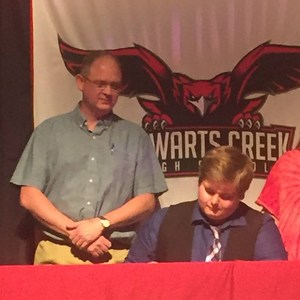 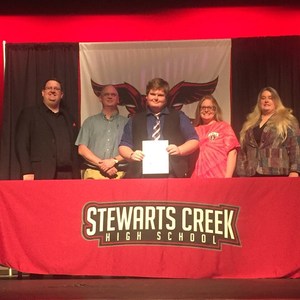 28 Students to Study Fine Arts in College Next Year

Four years ago, Tristin Hicks didn't know what to expect when entering Stewarts Creek High School for the first time.  Like all members of that inaugural freshmen class, he was enamored with the newness this fledgling building had to offer.  But it wasn't the smell of fresh paint or the untouched classroom floors that caught Tristin's eye - it was the theater lights.

"I took theater because it sounded like fun; I never thought I'd do it all four years," says the Senior, who recently committed to study Theater Performance at the highly-competitive University of Memphis.  "Now, I can't imagine my life without the Arts, and I can't wait to start at Memphis this fall."

Tristin, like many of his friends at Stewarts Creek, is a part of the first graduating class that attended Stewarts Creek for all four years.  Over that time, Stewarts Creek students have earned over thirty spots in the Governor's School for the Arts, placed over twenty students in an All-State band or choir, and won multiple statewide All-Star Cast Awards.  "Attending Governor's School in 2015 really changed my life," says Hicks.  "I knew then that Theater would be my life."

On Monday, May 8, Tristin and twenty-seven other Seniors commemorated their intent to study Fine Arts at the collegiate level at the Inaugural Stewarts Creek Fine Arts Signing Day.  With parents, teachers, administrators, college representatives, and over three hundred other Fine Arts students in attendance, these seniors were celebrated for their choice to start a career in the Arts.  And 28 students is a high number to choose this path, says Brian Russell, Choral Director and Chair of the Fine Arts Department.  He says that Fine Arts commitments for the Class of 2017 are at a rate fifty percent higher than the national average.

Donald Fann, one of two Theater teachers at Stewarts Creek, is understandably proud.  "They began here four years ago and quickly came together to create something unique," says Fann.  "Now, not only have they started traditions of excellence at Stewarts Creek, they are taking that passion for the Arts to the next step.  We wish them the best and look forward to their successes."

The following seniors participated in the Fine Arts Signing Day at Stewarts Creek: