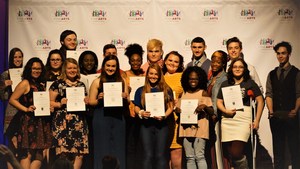 26 Students to Study Fine Arts in College Next Year

The Stewarts Creek Class of 2018 entered high school when the building was only a year old; over the last four years, Fine Arts students at Stewarts Creek High School have earned over 50 spots in the Governor's School for the Arts, placed over thirty students in an All-State band or choir, earned numerous All-County awards in visual arts, and won numerous All-Star awards at the Southeastern Theater Conference.

On Monday, May 14, twenty-six Seniors commemorated their intent to study Fine Arts at the collegiate level at the Second Annual Stewarts Creek Fine Arts Signing Day.  Students who were majoring in the Arts or who are receiving scholarships in the Arts participated in the ceremony.  With parents, teachers, administrators, college representatives, and over three hundred other Fine Arts students in attendance, these seniors were celebrated for their choice to start a career in the Arts.

Donald Fann, one of two Theater teachers at Stewarts Creek, is understandably proud.  "They began here four years ago and quickly came together to create something unique," says Fann.  "Now, not only have they started traditions of excellence at Stewarts Creek, they are taking that passion for the Arts to the next step.  We wish them the best and look forward to their successes."

The following seniors participated in the Fine Arts Signing Day at Stewarts Creek:

Parents/Students: Photos from the Ceremony can be found at: